“Wild animals never kill for sport. Man is the only one to whom the torture and death of his fellow-creatures is amusing in itself.” 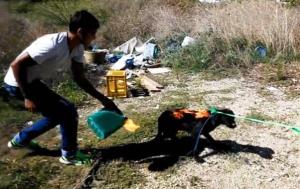 Some of you may have seen a video shared on Facebook on or after the 26th Sept 2014 which showed a dog suffering extreme cruelty in Greece.

The video was removed by the user who then removed themselves from
Facebook after numerous threats against him. The video was viewed by over 30,000+ people and shared over 900+ (i hope it was shared for the right reasons – to help identify the people in it).

Myself and a number of other people on twitter and on social networks contacted many News organisations in the UK/Greece, also contacted where the Greek Embassy/Tourism Board/Police and members of the Greek Parliament, as yet we have not received any responses.

However we are now glad to report the following that has today appeared on the Hellenic Police Force website :

Hopefully now Justice can be Served:

These three uunder-ageRoma, who doused with flammable liquid and set fire to dog

The Minister of Public Order and Protection of Citizen. Kikilias Claus, on the occasion of the immediate identification of offenders, stated, inter alia:
“Animal welfare is a moral and sample culture and humanity … .. I will repeat once again: Zero tolerance for such bbehaviour”

After inquiries by the Department of Electronic Crime and Police Departments Arta and Ioannina identified the perpetrators, who recently doused with flammable liquid and set fire to a dog, in the region of Arta.

Note that this monstrous act was filmed and the material in question was posted on the internet, why the Address Cyber Crime held a series of complaints.

To identify the perpetrators preceding preparatory steps from Address Cyber Crime, which informed the First Instance Court of Athens and was ordered to carry out a preliminary examination.

Under the waiver of confidentiality of communications and coöperation with companies in the internet, found traces of the electronic video question in Roma camp in Arta.

Today (30-09-2014) early in the morning, organized police operation involving the police prefecture of Arta and Ioannina, and participated Officer of Cyber Crime Division.

Under the police operation identified three Roma minors aged 11, 14 and 16 years who were identified as the perpetrators of heinous acts. Meanwhile, investigations are ongoing to identify and fourth offender, who was involved in the filming and post questionable material online.

Against these perpetrators criminal briefs, while the three minors in the custody of the First Instance Court of Arta.

Noted that the issue of corporate managers social networking internet sites that hosted this video responding to a written update on Cyber Crime Division and withdrew – deleted immediately controversial material.

The Minister of Public Order and Protection of Citizen. Kikilias Claus, on the occasion of the immediate identification of offenders, said: “Animal welfare is a moral and sample culture and humanity. After our initiative to tighten the penalties for those who abuse animals, daily affirm our decision to penalize those who violate written and unwritten rules for their protection. I will repeat once again: Zero tolerance for such behavior. “

Unfortunately due to the age of the perpetrators of this heinous crime, they can not be sentenced, their parents however can be fined for child neglect, there is still one individual that has as yet not been caught/arrested : Babis Papadhmhtrioy

This is the individual who uploaded the video and is believed to be the one filming it, though this has yet to be confirmed, he at least is of a punishable age and yet may face a prison sentence, but again this is unlikely to happen as shown by earlier case of animal cruelty in Greece, the perpetrators usually end up with a suspended sentence.

This needs to end and the Greek Courts need to start punishing the people who commit these crimes with sentences that reflect the crimes, a message needs to be sent so that others do not repeat the crimes, if you feel the same way contact your local MEP and ask him to raise the question of lenient sentences for animal cruelty in Greece, tweet about it/post on Social Networks/email the Greek Embassy or their Tourist Board

Here’s a few useful Twitter Email addresses to send to:

Maybe if enough people keep at them the attitude towards punishments might change, whats a few minutes of your time writing and sending an email to the life-time of pain you might prevent for an animal in Greece …. think about it then act.

Finally thanks go  to Lulu Black of the www.Canecorsoukmolosserrescue.com Rescue who spotted the video & without whom I wouldn’t have seen it & taken action.

Also thank you to the Twitter User @Greeceexposed for also pursuing this with the Hellenic Police and the Hellenic Govt, if you wish to learn more about the atrocious  ongoing record that Greece has for animal cruelty I suggest you follow @greeceexposed on Twitter or visit there YouTube page Greece Exposed , I must warn you that it is quite graphic and not for the some people, but if we don’t see such cruelty, how are we to combat it

@GreeceExposed He was taken to the vet named as George Trompoukis critical condition with burns has a high fever. pic.twitter.com/HSwnAXIyoO

@GreeceExposed If our readers wish to follow the dogs story direct, you can go to the social media (facebook) page facebook.com/filozoikosomat…