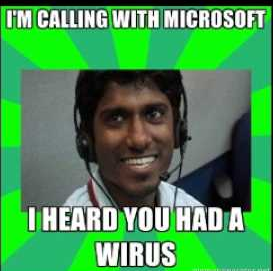 So in my last post I explained a friends Auntie had received a call a Microsoft Support Scam, well after cleaning her PC of all traces of the software they had installed and removing the SAM Hive Encryption they’d placed on her PC, I discovered that they had actually managed to get hold of her Credit Card details and used Western Union to transfer over £750+ of her money to themselves.

After speaking to various people including Barclays Bank, Western Union and Action Fraud, I was eventually able to persuaded Barclay Bank Credit Card Fraud and Disputes Dept to class this as a Fraud and they have zero’d the payment on her Credit Card, so thankfully this transaction won’t be appearing on her next bill.

The people who perpetrate this sort of scam are in my view are nothing but scum and oxygen stealer’s, to defraud an 81 year old of over £750 (and they are still calling her saying they want more, they think her PC is still locked with a password) and not care that this could be all she has in the bank is disgusting.

Below is a video recorded by an Employee of Malwarebytes showing just how they can persuade people to give access to a PC and it also shows just how ruthless/mean they are if they don’t get what they want.

If you ever receive a call from these scammer’s, tell them you don’t have a computer and then hang-up