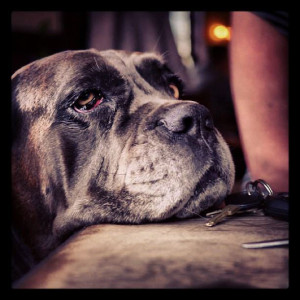 BluBluMaggieMoo
Stinks of farts and Smells of Poo

Just wanted to let everyone who reads my blog that we lost our dog Blue on Wednesday 20th August 2014, we had to let her go after she suffered complications relating to a precardial effusion

To everyone we’ve met through Blue, we just want to say thanks for taking her into your hearts and if you ever see us looking sad, know its a happy sort of sad, cause we are probably  thinking about her.

She came into our lives in June 2007 and filled everyday she was with us with joy and happiness and our lives are a sadder sadder place without her, she had a wonderful 7 year adventure with us as we did with her.

She helped me ruin two 3 Series BMW Estates with her puddy paws and blue/grey hairs and who could forgot, her wonderful dribble, the amount of times I had to fork out well in excess of £70 to get the car professionally valeted, because of that dribble and hair, but hey she was worth it.

She stole into our warm Saturday morning bed when either of us left it for even a moment and then it would be a case of trying to persuade her to move so we could snuggle back in, never shouted at her to move as she always eventually did, though it might just have taken a few gravy bones to finally get her to give up her place.

I’ll miss driving along with both back windows open no matter what the weather, just so Blue could stick her head outside and entertain all the other drivers around us, watching them smile at her at Traffic lights or when we were sat in Traffic, I think on many occasions she probably calmed quite a few people on the roads and made their days just a little bit brighter.

Over the years Blue helped promote the Cane Corso breed to many many people who had never heard or seen a dog like her, she was even voted the Ambassador for the Breed in 2009 and even though she could be the most ignorant dog to people sometimes, they still all wanted to say hello.

Her favourite trick was to ignore someone until they were given a gravy bone by either me or Mel and then she’d walk up to them and if asked, give her paw and then ever so gently prise the Gravy bone from their fingers and just when they thought they’d won her over and could spend some time saying hello properly, she’d just up and turn around and find someone else to give her a biscuit.

Our girl certainly knew how to play a room 🙂

There’s so many things I could tell you about Blue, about what made her such a special dog to me and Mel, but I can’t right now, as everything is still to raw and just typing these few paragraphs has had me in tears throughout, maybe in a couple of weeks I might find it less painful, though I doubt it, how can losing a piece of your heart ever not be painful.

Blue relaxing on our Devon Holidays